Almost Invincible is a remarkable fictional account of the life of Mary Shelley, arguably one of the literary world’s greatest enigmas. 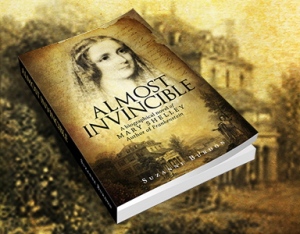 “She is singularly bold, somewhat imperious, and active of mind. Her desire of knowledge is great, and her perseverance in everything she undertakes,  almost invincible.”

Mary Shelley began Frankenstein in a thunderstorm in 1814, when she was eighteen. By then, she had been living for two years in a scandalous relationship with the poet Percy Bysshe Shelley, who was already married with children. The novel was conceived in a contest with him and Lord Byron to tell ghost stories.

When she eloped with Shelley, Mary had been quite prepared to suffer condemnation from society. It was much harder to cope with her jealousy of Claire, her step-sister, who had run away with them and was also in love with Shelley. During the nine turbulent years Mary and Shelley were together, Claire was the ever-present third, whose manipulative behaviour often drove Mary to despair. Shelley was little help – his unconventional attitudes to love strained her devotion to its limits.

They moved constantly throughout England, Switzerland and Italy, escaping creditors, censorious families and ill health. It was in Italy that they found their spiritual home, their ‘paradise of exiles’, but it was also there that the loss of her children nearly broke Mary’s spirit.

Her writing became her grip on sanity, and Shelley never wavered from his belief in her creative genius – as she believed in his.