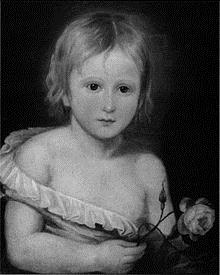 William Shelley aged 3
‘He gets dearer and sweeter every day’

Mary Shelley had five pregnancies and only one surviving child. She was, though, an instinctive and devoted mother. When I give talks about Mary and the nine years of her relationship with her poet, Shelley, I quite often hear someone automatically dismissing any deep sympathy. “Well, they were used to children dying young in those days, so they didn’t get as emotionally attached” is a typical comment.

Mary’s own words give the lie to that stereotype. Her letters and journals show her deep love for her children and her overwhelming sorrow when tragedy took them from her.

When Mary eloped with Shelley, at sixteen, she almost immediately became pregnant, and was either pregnant or breastfeeding for much of the next nine years. Unusually for the time, Shelley was very keen on Mary breastfeeding their children and even though she usually had a nurse to help with the children she was a very involved mother.

Their first child, who they called Clara was a seven-month baby and though not expected to live, survived eight days. Two weeks after her death, Mary wrote in her journal: “Dream that my little baby came to life again – that it had only been cold and that we rubbed it by the fire and it lived – I awake and find no baby – I think about the little thing all day.”

Then, at eighteen she gave birth to William, nicknamed Willmouse. His parents adored William. Mary’s wrote: ‘Blue eyes – gets dearer and sweeter every day – he jumps about like a little squirrel’. William was with his mother in Geneva when she conceived Frankenstein, and then in Bristol as she finished her masterpiece.

The next year Mary gave birth to Clara Everina, and for a time it was a happy, nuclear family in a big old rambling house in the English countryside. Then they decided to move to Italy and Clara became sick and died as they travelled, and Mary writes of their rush to Venice to find a doctor, ‘when nerves were strung to their utmost tension by mental anguish.’

When William also died in Rome nine moths later at the age of three and a half, it nearly broke Mary. She went into a deep depression. As they watched over his last hours, Mary wrote to a friend; ‘The misery of these hours is beyond calculation –The hopes of my life are bound up in him.’ Shelley suffered as much. He wrote a poem: ‘My lost William, thou in whom/Some bright spirit lived/ ….if a thing divine/Like thee can die,/ thy funeral shrine/Is thy mother’s grief and mine.’

After William died, when she was twenty-one, she gave birth to Percy Florence. However, Mary was wracked by concern in case fate would also snatch this child from her. ‘It is a bitter thought that all should be risked on one yet how much sweeter than to be childless as I was for 5 hateful months’, wrote Mary – a strong testament to her devotion to her children.

Percy gave her great pleasure after Shelley’s death: ‘a fine tall boy’ who she thought ‘might have the art of painting in his tiny fingers’ and was ‘amiable and vivacious, and I dare to hope for some comfort from him.’ When his grandfather, Sir Timothy Shelley, offered financial support on condition he take charge of the boy, Mary chose to make her own living through her writing rather than give him up. Percy survived, to marry happily and to take care of his mother in her later years.

Motherhood was clearly a very strong bond for Mary, and each child was loved and valued. There was no support here for the perception of ‘emotional distance’. They were as much part of her life as her writing and her love for Shelley.

Quotes taken from The Journals of Mary Shelley (Feldman and Scott-Kilvert 1987) and The Letters of Mary Wollstonecraft Shelley Volume I (Betty T. Bennet ed 1980).

This entry was posted in Mary Shelley, Romantic Era. Bookmark the permalink.