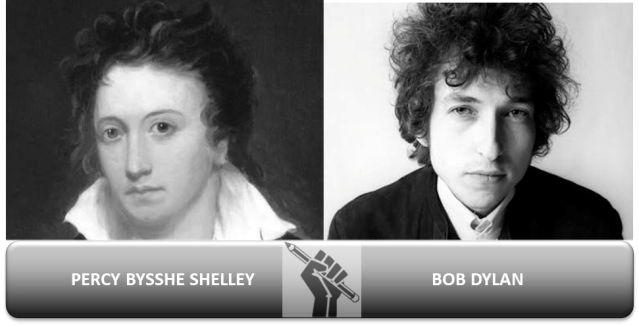 As Bob Dylan has finally accepted his Nobel Prize, (though not yet given his Nobel performance) I was reminded of the essay In Defence of Poetry by Percy Bysshe Shelley, in which he claimed that:

“poets are the unacknowledged legislators of the world.”

Shelley saw it as his mission to redress political and social evils through poetry. In the early nineteenth century, poetry was part of pop culture, albeit a sophisticated culture only available to the intelligentsia and upper classes.

His poem The Mask of Anarchy, for instance, is a response to the Peterloo Massacre of 1819 in Manchester, when solders fired into a peaceful protest which was calling for democratic reform.

Rise like lions after slumber
In unvanquishable number
Shake your chains to earth like dew
Which in sleep had fallen on you –
Ye are many – they are few.

As I research more into the Romantic period I am continually struck by the plus ca change, plus sa meme chose nature of human and social behaviour. Though poetry is not such a potent force this century, its mission, as Shelley envisaged it, has migrated into mass culture by means of the singer-songwriter. Dylan, is, of course, an exemplar of songwriting as a means of social and political protest. Blowing in the Wind is equally powerful and memorable poetry:

Shelley thought of poetry as instinctive. He spoke of the poetical process as the “… power of communicating and receiving intense and impassioned conceptions respecting man and nature.” Dylan echoed this when he remarked, “Well you know, I just thought I was doing something natural.”

Many songwriters have had strong social and political influence in the past fifty years, fighting injustice, begging for peace and calling for help for minorities and the disadvantaged. Some of the more iconic songs that come to mind are Joan Baez: We Shall Overcome; John Lennon: Imagine, Pete Seeger: Where have all the Flowers Gone; Live aid: We are the World; U2: Sunday Bloody Sunday; Michael Jackson: Man in the Mirror; Midnight Oil: Beds are Burning; Lady Gaga: Born This Way; Woody Guthrie: This Land is your Land; Tracy Chapman: Talking about a Revolution.

Everyone has their own list of songs that have pricked their social or political consciousness. It would made Percy Shelley proud, and he would have reeled at the size of the audience!

However, Joan Baez, interviewed recently in Rolling Stone about protest in the Trump era said of protest music ‘ there’s not enough right now. It’s terribly important, because that’s what keeps the spirit. Carping and shouting, much as it gets things off your chest ..you really need something uplifting.The problem right now is that we have no anthem’.

Suzanne Burdon is author of Almost Invincible, A Biographical Novel of Mary Shelley, author of Frankenstein. She is currently working on a novel about Lord Byron.