Vaccination is in the news again

The Australian Government has recently announced ‘tough new measures’  to try and ensure that all children are vaccinated. It proposes withholding childcare payments and tax benefits from families who don’t get their children vaccinated.

Vaccination is said to have saved more lives in the past century than any other medical achievement, but since its inception there have always been objectors and scare campaigns about the side effects.

Mary and Shelley were early users of vaccination. They had their son William vaccinated against smallpox in 1816.

Mary’s half-sister, Fanny, had smallpox scars on her face, and Mary herself contracted a dose when she was 32, while she was visiting her lesbian friends in Paris. She was ill for three weeks, and then, when recovered but sill marked and having lost some of her hair, she went briefly into Parisian society. She says: ‘It was rather droll to play the part of an ugly person for the first time in my life, yet it was very amusing to be told- or rather not to be told but to find my face was not all my fortune.’

She was not anxious to repeat the experience though, and retired to the coastal resort of Hastings for two months where the doctors assured her that regular sea bathing would heal her scars.

‘My poor hair it is a wonder I did not lose it all -but it has greatly suffered.’.

Edward Jenner was the pioneer who discovered that a cowpox vaccination could protect against smallpox. Prior to that, in the 18th century in Europe 400,000 people died every year from smallpox, across all levels of society. If they didn’t die, sufferers either went blind or were disfigured with scars. The term vaccination comes from Vacca, the Latin for cow.

Nevertheless there were many objectors to the practice. Some parents were worried about the scar, some thought it unchristian, and some speculated on terrible side effects. The 1802 cartoon below shows how some people thought of the disastrous outcomes – cows emerging from patients. Others suggested that the children vaccinated might grow horns. 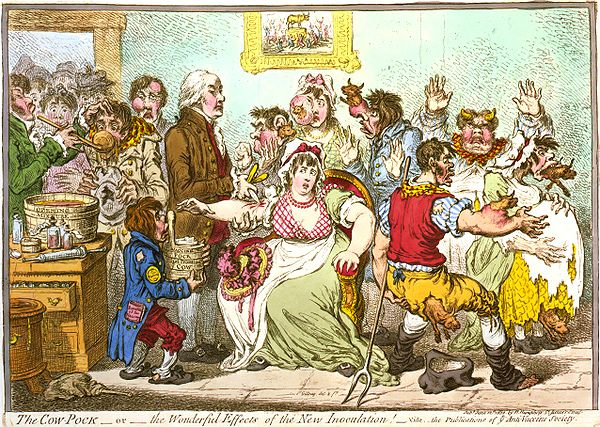 It wasn’t until 1853 in the UK that vaccination was made compulsory for children under 3 months, and in 1867, for up to fourteen years old.

This entry was posted in Mary Shelley. Bookmark the permalink.