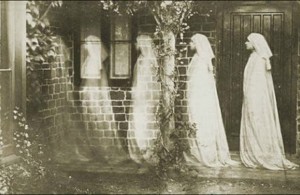 In August 1816, a week before they left Geneva where Frankenstein was concieved in a summer of bad weather and ghost stories, the Shelleys and Byron were visited by Matthew Gregory Lewis. He was author of a gothic supernatural novel called The Monk, a favourite of the young people staying by the lake. Percy Shelley writes in their joint journal, that Lewis told them ghost stories in the evening, of which this is one…..

“This lady, Minna, had been exceedingly attached to her husband, and they had made a vow that the one who died first, should return after death to visit the other as a ghost. She was sitting one day alone in her chamber, when she heard an unusual sound of footsteps on the stairs. The door opened, and her husband’s spectre, gashed with a deep wound across the forehead, and in military habiliments, entered. She appeared startled at the apparition; and the ghost told her, that when he should visit her in future, she would hear a passing bell toll, and these words distinctly uttered close to her ear, “Minna, I am here.” On inquiry, it was found that her husband had fallen in battle on the very day she was visited by the vision. The intercourse between the ghost and the woman continued for some time, until the latter laid aside all terror, and indulged herself in the affection which she had felt for him while living. One evening she went to a ball, and permitted her thoughts to be alienated by the attentions of a Florentine gentleman, more witty, more graceful, and more gentle, as it appeared to her, than any person she had ever seen. As he was conducting her through the dance, a death bell tolled. Minna, lost in the fascination of the Florentine’s attentions, disregarded, or did not hear the sound. A second peal, louder and more deep, startled the whole company, when Minna heard the ghost’s accustomed whisper, and raising her eyes, saw in an opposite mirror the reflexion of the ghost, standing over her. She is said to have died of terror.”