200 years on from the genesis of Frankenstein – Part 1

200 years on from the genesis of Frankenstein – Summer 1816 in Cologny, on the shores of Lake Geneva 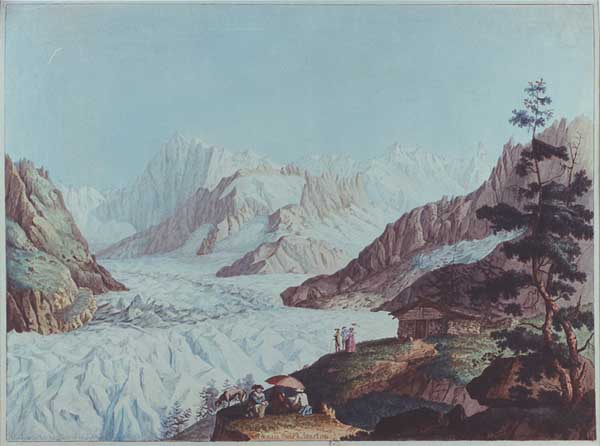 It was the ‘Year Without a Summer’. Endlessly dark, stormy and apocalyptic. Byron threw out a ghost story challenge and Mary conceived Frankenstein.

It is some weeks later before Mary first refers to ‘writing her story’. During this time she and Shelley and sometimes Claire were exploring the Swiss mountains. As the weather improved they set off on mules to climb to Montanvert one of the large glaciers that forms the Mer de Glace (the Ice Sea), in the Chamonix Valley. In her journal Mary called it ‘the most desolate place in the world’. Mary used the setting in chapter ten of Frankenstein, where Frankenstein first encounters the Creature, his now independent creation, ‘bounding over the crevices of ice’ with ‘superhuman speed’…

“The ascent is precipitous, but the path is cut into continual and short windings, which enable you to surmount the perpendicularity of the mountain. It is a scene terrifically desolate. In a thousand spots the traces of the winter avalanche may be perceived, where trees lie broken and strewed on the ground, some entirely destroyed, others bent, leaning upon the jutting rocks of the mountain or transversely upon other trees… The surface (of the glacier) was very uneven, rising like the waves of a troubled sea, descending low, and interspersed by rifts that sink deep” – Mary Shelley. Frankenstein.