200 years on from the genesis of Frankenstein – Part 2

200 years on from the genesis of Frankenstein – Notes on July and August 1816 in Cologny, on the shores of Lake Geneva. 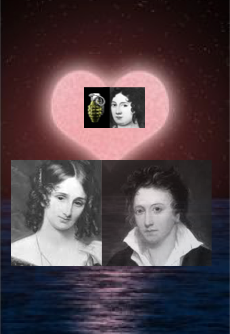 In that eventful August while Mary was beginning to write ‘her ‘story,’ the others in the group on the lake had a secret. Claire, Mary’s stepsister, told Shelley that she was pregnant to Byron and Shelley tried to negotiate with Byron on her behalf. Byron had already begun to hate Claire and was not prepared to commit to anything, so Shelley quietly made a new will with provision for Claire and her child. He did not tell Mary of the situation immediately because he knew she would be angry, and neither could foresee just how badly it would affect all their lives.

When Shelley had his 24th birthday on 4th August, Mary bought him a telescope and they celebrated with a boat trip on Lake Geneva, during which Mary read to him from Virgil (a 19C Roman poet). Ah, how romantic … before the next bombs landed.